A People that Forgives - Palm Sunday

From: B S TURNER Owner
bturner12@centurylink.net


A People that Forgives - Palm Sunday

As we enter into the week where the journey of the Christian dies and begins at the same time. History, and the Bible, record that the earthly ministry of Christ comes to an end and at the same time we begin our spiritual freedom as he takes upon himself all of your and my sins.

It can be summed up in a word – Forgiveness...through the power of the atonement God forgave us of all of our sins.

The question is as a people can we forgive? I mean truly forgive anyone that we believe has sinned against us? We are told to ask for forgiveness but sometimes we forget, or choose to not remember, what the real guidance is...

This same guidance is given when Christ teaches us about the proper way to pray to the Father as given in Luke 11:1-5

We are in a precarious position as Restorationists and true believers of Jesus Christ when it comes to this. We believe that we have the light and truth and that we clearly understand the gift that was offered as he sacrificed his life for us.

I make that statement as we have many, both in the Church and out of the Church, which we struggle to forgive, truly forgive – if that were not the case I do not think we would be as scattered both physically and spiritually as we are at this moment. You see if I think that you hurt me I really can’t hear you or see you can I?

If I were to say to you today I am sorry for any wrong that I may have caused you would you believe me? (First I would have to admit that I was wrong about something…another hurdle to get over.)

Would you be able to start afresh with me and I with you? Or would there still be in my or your mind the event that caused me to be offended?

Sometimes the hurt or deception can be deep, I get that – can it be any deeper than the nails that pierced the flesh of the Savior when they hung him on the cross? Even through all of that he still forgave me…and you. And continues to do so when I fall…

There is a similar lesson of forgiveness of brother forgiving brother. That can be found in 1 Nephi 2:34 where Nephi forgave his brothers…as we read Nehi’s testimony this became a regular event but Nephi never lost the concept of why he was to do that. Do you know what that concept is?

Paul and Barnabas were preaching to the Jews in Antioch not having much success. It became clear to them that the word of God was not being taken seriously as he said “but seeing ye put it from you” meaning the word of God, they took it to the Gentiles who “glorified the word of God” Acts 13:48

If we are able to forgive then we can begin to see clearly the path that we are to be on. Paul told the Ephesians that Christ will give us the spirit of wisdom and revelation in Him. We need to ready ourselves so that we will be able to see when that happens.

Ephesians 1:17 That the God of our Lord Jesus Christ, the Father of glory, may give unto you the spirit of wisdom and revelation in the knowledge of him;
1:18 The eyes of your understanding being enlightened; that ye may know what is the hope of his calling, and what the riches of the glory of his inheritance in the saints,

There is no question that we are all in this together...

Ephesians 2:5 Even when we were dead in sins, hath quickened us together with Christ, (by grace ye are saved;)
6 And hath raised us up together, and made us sit together in heavenly places in Christ Jesus;
7 That in the ages to come he might show the exceeding riches of his grace, in his kindness toward us, through Christ Jesus.
8 For by grace are ye saved through faith; and that not of yourselves; but it is the gift of God;

There is a common word in the above scripture...do you see it?

As we make our way through this next week take a few moments to reread the story of the crucifixion and what happens after...what does Christ teach when he returns?


Posted by Restoration News - if you want to add a post - e-mail gdschnack@hotmail.com at 1:52 PM No comments:

I spoke briefly with Brother Ballantyne last evening. He tells me that he is feeling some better. The first few days he had considerable trouble breathing, he really felt he might need a ventilator. That has changed in the last couple of days and he feels he is breathing normally. He is still quite tired and sleeps considerably both day and night. PLEASE if you call him keep your conversation very short. Just wish him God's blessings. Do not expect him to share with you the details of how he feels.

Speaking with Beverly also yesterday, she and Mike are unaware if any other family members have been infected. They say their daughter Mary seems to be doing OK.

The hymn reminds us that our prayers are much availing if we walk upright and just.

May God bless and protect each of you,
Lyle Smith

PS: I trust each of you will join with Sherrie and me today in reading of Christ's entry into Jerusalem as found in the four testimonies of Matthew, Mark, Luke and John.

Posted by Restoration News - if you want to add a post - e-mail gdschnack@hotmail.com at 9:02 AM No comments:

We
need to ROW harder now than ever before!

Have
we heard many voices calling for repentance today? This verse is still valid:

“If
my people which are called by my name shall humble themselves, and pray, and seek my face, and turn from their wicked ways, then will I hear from heaven, and will forgive their sin, and will heal their land” (2 Chronicles 7:14). One of our wicked ways is
to think that we don’t have any wicked ways!

Why
did the writers of the Book of Mormon repeat this admonition over and over?

“Inasmuch
as ye shall keep my commandments, ye shall prosper in the land” (2 Nephi 1:34).

Are
we also slow learners? Remember that “prosper” means much more than obtaining wealth.

Have
the Saints lost their desire to seek first to build up the Kingdom of God?

“Behold,
the Lord requireth the heart and a willing mind; and the willing and obedient shall eat the good of the land of Zion in these last days” (Doctrine and Covenants 64:7a). Don’t forget that the Nephites willfully rebelled against God after they knew His commandments, and they suffered His judgment.

We
need to ROW harder now than ever before!

Posted by Restoration News - if you want to add a post - e-mail gdschnack@hotmail.com at 3:55 PM No comments:

There is a children’s Sunday school class tomorrow morning at 9:45 —-on ZOOM!

There are also several churches and organizations having church meetings tomorrow, but if yours isn’t, we’d love to share with any saints who would like to join us!

Our meetings are very interactive, so if you’d like to ask questions or contribute thoughts during class, we’d love that!

Devon Park is inviting you to a scheduled Zoom meeting.

Devon Park is inviting you to a scheduled Zoom meeting.

Posted by Restoration News - if you want to add a post - e-mail gdschnack@hotmail.com at 1:46 PM No comments:

My 93-year-old aunt, Carrol Eklund (member of the South Crysler Restoration Branch), is experiencing difficulties as she has not been able to walk since Tuesday, March 31, and because of that she had a fall which resulted in bruising and also fractures to both feet. She lives at John Knox Village in Independent Living and is now requiring around-the-clock assistance.  Because of COVID-19 no one is allowed to visit her other than by telephone. Her caregivers have been able to take her to the doctor's office for x-rays and also a CT scan which found no acute stroke, and they will try physical therapy beginning this Monday, April 6. The desire of her heart is to be delivered from this life and rest in the arms of her Lord in heaven.  Please pray that she will remain ever-faithful to the end and receive peace and comfort in the process.

Thank you very much for your anticipated prayers! 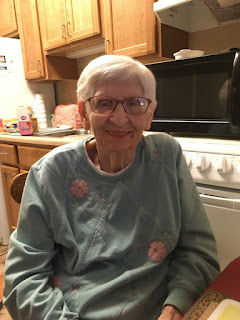 Posted by Restoration News - if you want to add a post - e-mail gdschnack@hotmail.com at 9:14 AM No comments:

New post from Liahona Broadcasting:
(Please hit the subscribe button while you're there and also the BELL for notifications of new posts.)


DISCLAIMER: Anything written or implied is not considered legal advice. This is a private email between the parties and not meant for public display. Any use of this communication without written prior consent will be deemed as violation of my Private Security Agreement, Tradename and UCC1 on file. TRADENAME/COPYRIGHT: As per NY Filing: UCC1 Finance Statement with Security Agreement SA-ALM03291963 anyone reproducing, using any form of my name, emails, etc. could be charged up to $50,000,000.00 per action.

Posted by Restoration News - if you want to add a post - e-mail gdschnack@hotmail.com at 3:45 PM No comments:

I trust the Lord is blessing you as we continue through this difficult time. As you know the children are not in school, many are working from home and a lot of business is being done with computers on line.

So, I thought I would do a Church History class on line. I will ask two questions and then give a home work assignment to be done between you and the Lord.

Question 1: Where is the monument, in Missouri, to the Three Witnesses of the Book of Mormon? I'm sure there were many who answered that question quickly. Good.

Question 2: Where is the monument, in Missouri, to the Eight Witnesses to the Book of Mormon? Did anyone know that one?

I have to admit that I didn't either until earlier this week. As you go north, from Independence, MO, on Highway 291 toward Liberty, MO. there is a bypass to the west side of Liberty called the South Liberty Parkway. As you follow that road, there are many side streets, housing editions and even a town called Glenaire, MO. Having traveled this area few times, I got on the computer to find other roads. As I did so, and enlarged the screen, something "jumped" out at me. It said, "Testimony of the Eight Witnesses and Zion's Camp Historical Monument."

And to my amazement, there it was! It was erected by the LDS Church in 2011. It is in a nice fenced in area with a picnic table and a family gravesite. There are no other facilities and only parking space for 2-4 cars, but worth the trip.

Anyone can pull this up on the computer by typing in the name listed.

The actual happenings on this plot of ground and surrounding area was in 1833-35 or so, when the Saints were being run out of Jackson County, MO.

Homework? Read Church History Volume 1, Chapters 16-18. Included in these chapters is an APPEAL the Saints made to local, state, and national government leaders.

And we think we have it bad with the virus.

This God is the God we Adore.

Posted by Restoration News - if you want to add a post - e-mail gdschnack@hotmail.com at 2:05 PM No comments: