“When you are converted, strengthen your brethren”
(Luke 22:32)

Simon Peter thought he was a real Christian until after his conversation with Jesus. “And the Lord said, Simon, Simon, behold Satan hath desired you, that he may sift the children of the Kingdom as wheat. But I have prayed for you, that your faith fail not; and when you are converted strengthen your brethren. And he said unto him, being aggrieved, Lord, I am ready to go with you, both into prison, and unto death. And the Lord said, I tell you, Peter, that the cock shall not crow this day, before that you will thrice deny that you know me” (Luke 22:31-34).

It is likely that Peter, and the ten others of the twelve, were not fully converted until Jesus came, “the doors being shut, and stood in the midst, and said, Peace be unto you. Then saith he to Thomas (the one who doubted), Reach hither thy finger, and behold my hands; and reach hither thy hand, and thrust it into my side; and be not faithless, but believing. And Thomas answered and said unto him, My Lord and my God. Jesus saith unto him, Thomas, because thou hast seen me, thou hast believed; blessed are they that have not seen, and yet have believed” (John 20:26-29).

We are among those who have not seen, yet have believed. The words of warning Jesus spoke to Simon need to be heard by us today: “Francis, Francis, behold Satan hath desired you, that he may sift the children of the kingdom as wheat. But I have prayed for you that your faith fail not” (Luke 22:31-32). Do we ask Jesus to pray for us? We should! How many siftings have we experienced? How many of our friends are “wandering in strong roads?” (1 Nephi 2:81). Are we immune to falling away into “forbidden paths?” (1 Nephi 2:76). We must “be sober, be vigilant; because your adversary the devil, as a roaring lion, walketh about, seeking whom he may devour . . .” (1 Peter 5:8-9). “. . . the devil is come down unto you, having great wrath, because he knoweth that he hath but a short time” (Revelation 12:12). 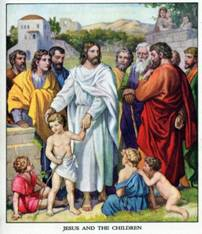 We all need to be converted from a natural man to Christ-likeness. Occasionally this happens quickly as with Saul of Tarsus who met Jesus on the road to Damascus and within days he was converted. “And straightway he preached Christ in the synagogues, that he is the Son of God” (Acts 9:20). Most often conversion takes place over a period of years. It may even take a lifetime. King Benjamin described the process: “The natural man is an enemy to God, and has been from the fall of Adam, and will be, for ever and ever; unless he yields to the enticings of the Holy Spirit, and putteth off the natural man, and becometh a saint, through the atonement of Christ, the Lord, and becometh as a child, submissive, meek, humble, patient, full of love, willing to submit to all things which the Lord seeth fit to inflict upon him, even as a child doth submit to his father” (Mosiah 1:119-120).

The words of King Benjamin agree with the words of Jesus: “And Jesus called a little child unto him, and set him in the midst of them, and said, verily, I say unto you, except ye be converted, and become as little children, ye shall not enter into the kingdom of heaven” (Matthew 18:2).

Alma asked, “have ye received his image [of Jesus] in your countenances: Have ye experienced this mighty change in your hearts? (Alma 3:28-29). Those of us who desire to live with the Lord and his saints during his millennial reign should ask ourselves these questions. Only the truly converted will live in his glorious kingdom.

Studying the conversion experiences of others may encourage and assist us with our own. On August 11, 1928, Bakht Singh, India’s foremost evangelist and indigenous church planter of the 20th century, had an unusual encounter with the Lord Jesus Christ, which eventually changed his life forever. On this date, Brother Singh was on board a ship bound for Canada. He was very proud of being a Sikh; a sect of Hinduism. He had possessed a great desire to go to England to advance his education. His mother had said to him, “I will help you go to England, but promise me you will not change your religion.” He said to his mother, “Do you really believe that I would change my religion?” (Brother Bakht Singh of India. T.E. Koshy, page 74).

After assuring his mother of his loyalty and faithfulness she persuaded his father to let him go to England. After the completion of his first year in London, Bakht was attracted to a sign with these words, “Why not spend your summer vacation in Canada?” A few weeks later he joined a group of twenty-five university students who were going to Canada to participate in harvesting crops.

The 11th of August was a Sunday. He saw a notice on the ship that a Christian service would be held at 10 A.M. in the first class dining room. He never had any interest in the Bible or in the teaching of the Bible, but he thought “if he did not attend this Christian service, his friends would think he was a narrow-minded Indian, so he decided to attend.

He occupied a seat in the back row. When the people stood to sing hymns, he stood too; when they sat down, he sat down. When the preacher began to speak, he went to sleep! Toward the end of the service they all knelt to pray. He wanted to walk away, but he felt embarrassed remaining seated while they were all praying on their knees. He thought he could walk out, but this was difficult because people were kneeling on either side of him, so just to be polite, he overcame his pride and knelt down.

Bakht Singh wrote: “The very moment I knelt down, I felt that some divine power had engulfed me, and I uttered these words, “Lord Jesus, I know and I believe Thou art the living Christ. From that day, the words ‘Living Christ’ became very real to me.” (Ibid. pp 81-82)

Brother Singh returned to Canada in 1929. During that time he met a Christian man, Owel Hansen, who was a bank manager in Winnipeg, Manitoba. This man seemed to have an unusual radiance, so Bakht Singh asked, “What is the happiest experience of your life?” The answer was, “when I accepted Jesus Christ as my personal Savior and Lord.”

Hansen gave Brother Singh an English New Testament. He read continuously for three days. On the third day he came to John 3:3 and could go no further. The words, “Verily, Verily,” convicted him. He knelt down and said, “Lord, I am a great sinner . . .” With tears rolling down his cheeks he said “Oh Lord, forgive me.” As he continued to weep, he heard these words, “Thy sins are forgiven thee.” Joy and peace came into his soul.

The Lord Jesus Christ, whom he had hated in his ignorance, had now become his best friend. The Bible he had rejected and burned now became his favorite book. The Lord was now preparing him to be his chosen vessel to lead many to righteousness” (Ibid. p 86). “When you are converted strengthen your brethren” (Luke 22:32).

My Love to All,
High Priest Francis Harper

Posted by Restoration News - if you want to add a post - e-mail gdschnack@hotmail.com at 7:32 AM