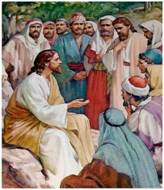 As Jesus sat upon the Mount of Olives, his disciples came to him privately, and asked, “What is the sign of thy coming; . . . and the end of the world? (or the destruction of the wicked, which is the end of the world). And Jesus answered and said unto them, Take heed that no man deceive you. For many shall come in my name, saying, I am Christ; and shall deceive many . . .” (Matthew 24:4-6, 9 IV; 24:3-5, 11 KJV).
Deception was the first sign Jesus gave of his coming. When Jesus said many would come in his name saying, “I am Christ,” he was quite likely referring to the thousands of Christian denominations that are claiming to represent Jesus in our world today.
Another sign was that false prophets would arise. Paul warned Timothy: “For the time will come when they will not endure sound doctrine . . . And they shall turn away their ears from the truth, and shall be turned unto fables” (2 Timothy 4:3-4). Such persons are easily deceived by false prophets and teachers who teach and preach things people want to hear, such as the “prosperity gospel” presently being preached in some of the mega churches of our land.
The words of Isaiah are still being fulfilled: “. . . this is a rebellious people, lying children, children that will not hear the law of the Lord; which say to the seers, See not; and to the prophets, prophesy not unto us right things, speak unto us smooth things, prophesy deceits;” (Isaiah 30:9-10).
Paul wrote to Timothy: “Now the Spirit speaketh expressly, that in the latter times some shall depart from the faith, giving heed to seducing spirits and doctrines of devils” (1 Timothy 4:1). True prophets speak the truth even when it hurts. They are usually considered extreme, fanatical and negative. They are rarely accepted by the majority. Paul was identifying with Elijah when he said: “Lord, they have killed thy prophets, . . . and I am left alone, and they seek my life” (Romans 11:3). Moses prophesied of Jesus: “The Lord thy God will raise up unto thee a Prophet from the midst of thee, of thy brethren, like unto me” (Deuteronomy 18:15). Yet when Jesus “came to his own,” fifteen centuries later, “they received him not” (John 1:11). The people were deceived by their priesthood and Jesus was crucified.
Isaiah wrote: “Woe unto them that call evil good, and good evil; that put darkness for light, and light for darkness; that put bitter for sweet, and sweet for bitter” (Isaiah 5:20). We are witnessing this deception in our nation today. Paul wrote: “Wherefore God also gave them up to uncleanness through the lusts of their own hearts; to dishonor their own bodies between themselves . . . for this cause God gave them up unto vile affections; for even their women did change the natural use into that which is against nature; And likewise also the men, leaving the natural use of the woman, burned in their lust one toward another; men with men working that which is unseemly, and receiving that recompense of their error which was meet [appropriate]” (Romans 1:24-27). Today, those who reject the homosexual lifestyle are considered evil!
In another letter, Paul says: “. . . because they received not the love of the truth, that they might be saved . . . God shall send them strong delusion, that they should believe a lie” (2 Thessalonians 2:11). I have been asked, “Would God actually send delusions to those who have not received the love of the truth?” My answer was: He allows us to be deceived, because he honors our freedom to receive or to reject the truth.
Jesus promised: And whoso [receiveth and] treasureth up my words, shall not be deceived” (Matthew 24:39 IV). “The natural man receiveth not the things of the Spirit of God; for they are foolishness unto him, neither can he know them, because they are spiritually discerned” (1 Corinthians 2:14). Spiritual discernment shields us from deception.

Paul wrote: “There are diversities of gifts, but the same Spirit.” . . . the manifestation of the Spirit is given to every man to profit withal. For to one is given by the Spirit the word of wisdom; to another the word of knowledge by the same Spirit; to another faith by the same Spirit; to another the gifts of healing by the same Spirit; to another the working of miracles; to another prophecy; to another discerning of spirits. . .” (1 Corinthians 12:7-10).
Paul counseled: “. . . covet earnestly the best gifts” (1 Corinthians 12:31). Discernment is certainly one of the best gifts for which we must fervently pray, lest we be deceived. The spiritual gift of discernment will assist us in distinguishing right from wrong and good from evil. A counterfeit is designed to deceive. We need to be able to differentiate the difference between that which is even slightly evil or sinful from that which is perfectly good and righteous. For God “cannot look upon sin with the least degree of allowance” (Doctrine and Covenants 1:5-f).
It has been stated: “With discernment comes division. A person who seeks to be discerning must be willing to suffer the effects of division.” The history of Christianity is littered with painful divisions. Many first century Christians willingly became martyrs rather than to deny that which they discerned to be true.
A few centuries later, many thousands even millions, of people who discerned a departure from faith within the Roman Church were killed. It is recorded in the Bible Commentary by Thomas Scott, 1857, Philadelphia: “No computation can reach the numbers who have been put to death, in different ways, on account of their maintaining the profession of the gospel, and opposing the corruptions of the church of Rome. A million of the poor Waldenses perished in France; nine hundred thousand orthodox Christians were slain in less than thirty years after the institution of the Jesuits; the Duke of Alva boasted of having put thirty-six thousand to death in the Netherlands during the space of a few years. The Inquisition destroyed by various tortures, one hundred and fifty thousand within thirty years.”
The Reformation Movement prepared the way for the Restoration which was led by Joseph Smith, Jr. This young man was accepted by many as a true prophet of God. In spite of this the majority rejected his message and he, like so many true prophets before him, was martyred. It is true that “time vindicates a prophet.” During the nearly two hundred years since the beginning of Joseph Smith, Jr.’s ministry, the evidence continues to accumulate to prove that he truly was a prophet of God.
Discernment, given by the Holy Spirit, has caused many divisions and separations within the Restoration. These separations have caused great suffering, especially when members of the same family see things differently. Satan understands the principle of war: “divide and conquer.”
The first great division within the Restoration happened when Brigham Young assumed the leadership of the church. Many were led by the Holy Spirit to reject his leadership. These people later became members of the RLDS Church [The Reorganized Church of Jesus Church of Latter Day Saints]. These persons claimed to be the faithful remnant of the Church of Jesus Christ.
In 1984 a major division occurred within the RLDS Church. As Jesus said to Peter: Satan would “sift the children of the Kingdom as wheat” (Luke 22:31). Since 1984, the deceptions and separations have continued. Long ago it was prophesied: “the numbers of the church would be few and their dominions small.” See 1 Nephi 3:220-231.
The warnings of Jesus to his disciples nearly two thousand years ago are especially appropriate for his disciples today: “Take heed that no man deceive you . . . For in those days [at the time of his coming], there shall arise false Christs, and false prophets, and shall show great signs and wonders; insomuch that if possible, they shall deceive the very elect” (Matthew 24:5, 23 IV; 24:4, 24 KJV). We are witnessing these things today.


Posted by Restoration News - if you want to add a post - e-mail gdschnack@hotmail.com at 7:02 AM