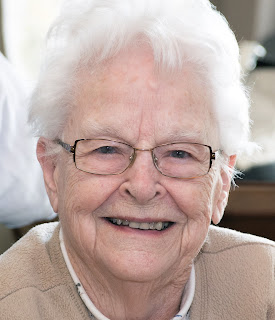 Chloe was born November 21, 1927 in Wichita, KS to Edgar and Rosa (Huntsman) Palmer. She was wed to her husband of 52 years, Don Oliver Elefson, in Independence, MO on April 10, 1954. Chloe and Don were a team and Don could never have done what he needed without her support. She typed up his master’s thesis to be bound. Chloe was a prolific photographer and always took the pictures at family gatherings and it is, in large part, due to her that many events were well documented. Her grandchildren remember fondly her “snack cabinet” and the generous heart she brought to everyone who entered her home. She had many and diverse interests. She was an accomplished artist, especially painting with oils. She participated in the Cantanina/Christiana choirs for many years. She enjoyed participating in the Independence Music Club. She was also involved in her church, especially the women’s department. Always a gracious hostess, sometimes hosting house busting crowds during World Conference or other family get togethers. She would claim she had accomplished nothing, however, she was a loving and giving person and accomplished much in the hearts of all those who knew her.

Funeral services will be 10:00 a.m. Saturday, January 11, at the Speaks Suburban Chapel, Independence. Burial in Lobb Cemetery. Visitation will be held from 6:00 to 8:00 p.m. Friday at the chapel. In lieu of flowers, memorials may be given to the organization of the donors choice.


Posted by Restoration News - if you want to add a post - e-mail gdschnack@hotmail.com at 1:03 PM