(Retyped from photo below)

Brother John R. Grice said he awoke with a feeling of heaviness and depression, and soon a vision passed before him.

He saw the president of the United States standing with a proclamation in his hand, which he was reluctant to read.  When he made the announcement to the country, everyone knew that we were insolvent.  Business, industry, and all activity came to standstill.  People stood in bewilderment, unemployed, confused, bewildered, desperate.  Those who were away from home were unable to return because they could not even buy gasoline.

He was also given to know that this Church, under the Endowment to the priesthood, began to make such progress that instead of baptizing four or five as we have now, hundreds at a time were baptized.  But with this great ingathering there came great persecution—so great that only those who were deeply grounded in the faith could withstand.  He felt particularly that we should train the young people so that they would be ready for this period of trial; otherwise they will be unprepared and will lose faith.  He was made aware that this great Depression is much nearer than we think. (He testified)

(Taken from a wire recording.)

Near this morning I was awakened, for I had been called upon to pass through an experience that was not at all pleasant.  I was given to understand that our great country had become insolvent.  I was privileged to see consternation upon the faces of the people, the inability to understand why these things should occur.

I saw a gentleman of one of our large manufacturing institutions, waiting and hopeful that he might not have to give out the message that was called to give—that was, it would be necessary to close shop, nothing could be done, our money had become so devalued to the extent it was worth little or nothing.  Men [were] stranded far from their homes with their automobiles and unable to purchase gasoline, though there was much of it to be had.  These are the things that await us in the future, even in this greatest country in the world.  Our hope as a people, as a Church, is to fortify ourselves as we shall have been busily engaged in building Zion, that is our task for performance.

Today, while some are fearful and unwilling, some not willing to give of themselves, others not willing to give of their possessions in harmony with the law, Zion is lagging behind in the steps that should be made—processes that should be going on to make possible the fulfillment of the purposes of God in building His great Church and Kingdom.  I hope our experiences, just as we have had this morning and of those we will yet continue to have, that we as a people shall forge ahead with greater rapidity in the you 1952 that is to near to us.  While there will be many clogs in the wheels of progress and things to hinder, I trust we will go forward and not cease our activities until Zion shines out, a city of refuge.  A place to be builded, not for the wicked, but for those who will not fight or take up their swords against their neighbors, who need to flee to Zion for safety—for in God’s land, and purposely the great Church has to be builded in this great state of Missouri—its headquarters here.  We have much to be thankful for.  I hope we live and profit by the experience of this day, and in the future, that will enable us to build if we will.

(Brother John R. Grice served as a seventy and then as a patriarch/evangelist in the Reorganized Church of Jesus Christ of Latter Day Saints.  He died January 7, 1969) 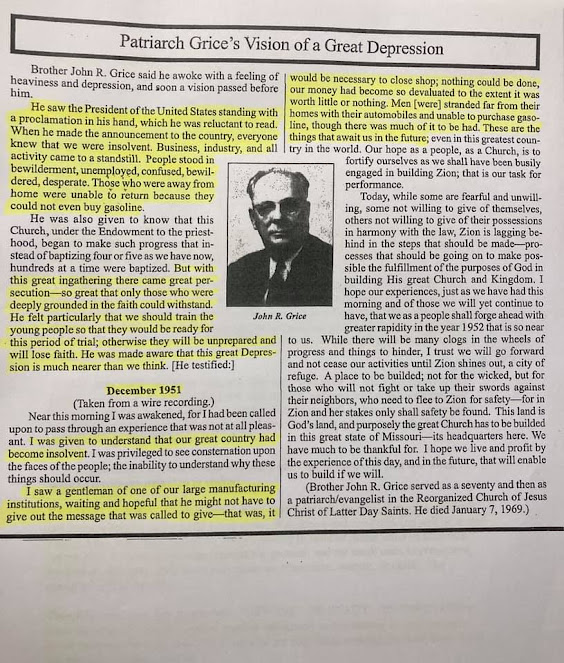 Posted by Restoration News - if you want to add a post - e-mail gdschnack@hotmail.com at 7:43 AM