Who Is A Good Parent?

Nephi called his parents good. In spite of this, two of their sons, Laman and Lemuel, “did rebel” against the good things they had been taught. “And now I, Nephi, being grieved for the hardness of their hearts, therefore I spake unto them, saying, even unto Laman and unto Lemuel, Behold, ye are mine elder brethren; and how is it that ye are so hard in your hearts, and so blind in your minds . . .” (1 Nephi 2:14).

We cannot judge parents as being good or evil by measuring the integrity of their children, even as we cannot judge the goodness of God by his offspring! Even good parents occasionally fail to raise godly children due to influences beyond their control. I believe it can be truthfully stated that raising Christ-like children, during these perilous last days, as they are described in 2 Timothy 3:1-7, is a greater challenge than ever before.

In the beginning, God said: “. . . thou mayest choose for thyself” (Genesis 2:21). The temptations of Satan are more numerous and tempting than ever before. Recognition of the opposition facing good parents today is the first step toward good parenting. 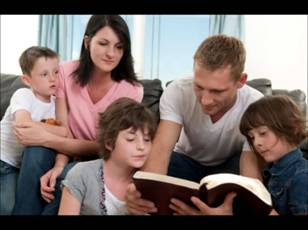 Solomon who was given unsurpassed wisdom by the Lord, gave this piece of advice to parents: “Train up a child in the way he should go; and when he is old, he will not depart from it” (Proverbs 22:6).

“If any provide not [temporally or spiritually] for his own, and especially for those of his own house, he hath denied the faith, and is worse than an infidel” (1 Timothy 5:8).

“Inasmuch as parents have children in Zion . . . , that teach them not to understand the doctrine of repentance; faith in Christ the Son of the living God; and of baptism and the gift of the Holy Ghost by the laying on of the hands when eight years old, the sin be upon the head of the parents; . . . and they shall also teach their children to pray, and to walk uprightly before the Lord” (Doctrine and Covenants 68:4a, c).

Although she never preached a sermon or published a book, Susanna Wesley is known as the Mother of Methodism. This is because two of her sons, John and Charles Wesley, applied the lessons they had learned from their mother.

Susanna gave birth to 19 children. Nine died as infants. A maid accidently smothered one child. At her death, only eight of her children were alive. Susanna suffered many hardships during her life. In spite of these trials, every Sunday afternoon she provided spiritual training for her children, and every night during the week she met with them, one by one, to address their personal needs. Her efforts were rewarded.

Children generally reflect the examples and teachings they receive from their parents and grandparents. I can truthfully say, I was blessed with good and godly parents. They had three children. I was their first-born. Three years later, daughter Hattie came. Finally after two more years, a second son, Allen, came to live with us.

Our mother expressed her love by her tears. Whenever we were leaving, even if for only a few hours, or days, she would shed tears at our parting. In the presence of the Holy Spirit, at family prayer times, she would shed tears. She prayed for us. I still remember one of her frequent prayers; “Lord, bless my children. Help them grow up to be a blessing to the people living in their community.” I have learned that a mother’s prayers can have a profound effect upon the lives of her children.

When he didn’t know I was watching I saw an uncle kneel by his bedside to pray. This powerful example taught me more in an instant, than in many sermons.

My grandmother Harper lived across the road from us during our growing up years. I was 12 years old when she died. This was my first encounter with the death of a dearly loved member of our family. The details of the day of her death and funeral are still vivid in my memory. In her later years she had become nearly blind. After I had learned to read, she would occasionally ask me to read some of her favorite passages of scripture for her. As I grew toward maturity, I began to question whether these reading sessions were for her benefit or for mine? I know they blessed me. One of the scriptures she asked me to read was Jeremiah 17:5: “Cursed be the man that trusteth in man and maketh flesh his arm.” This verse of scripture has served me well through the years.

The memories of my father become more precious to me with each passing year. I cannot begin to describe in the scope of this writing, the many things he taught us by precept and example. Perhaps I can do this later.

I want to finish by quoting what Rufus Jones, the “Universal Christian” said on his 80th birthday: “I am most of all thankful for my birthplace, and early nurture in the warm atmosphere of a spiritually-minded home with a manifest touch of saintliness in it; Thankful indeed that from the cradle I was saturated with the Bible and immersed in an environment of religion of experience and reality. It was a particular grace that I was born into that great inheritance of spiritual wisdom and faith, accumulated through generations of devotion and sacrificial love. I never can be grateful enough for what was done for me by my progenitors before I came on the scene. They provided the spiritual atmosphere of my youth.”

I can only add, Amen! He beautifully expressed my sentiments.

Posted by Restoration News - if you want to add a post - e-mail gdschnack@hotmail.com at 12:10 PM