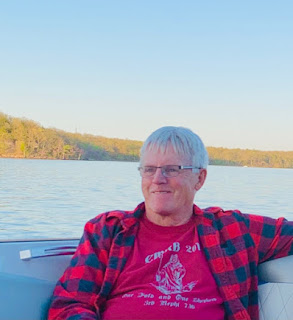 Visitation will be open house format on July 30th, 2021 at the Oak Grove Restoration Branch, 1204 N. Broadway, Oak Grove, MO, 5-6:30pm. Cake and ice cream will be served in honor of Jim’s birthday. He never passed up a reason to have dessert. A video of his life will play at 630pm and a Celebration of Life service will follow at 7pm at the church.

Jim was born in the beautiful upper peninsula Michigan on July 30, 1953 to Gus (Angus) and Hazel Mulheron, the youngest of 4 children. He grew up an avid hunter, fisherman, motorcycle and snowmobile enthusiast as well as loving fast muscle cars. He could recount any number of stories about every muscle car made in the 60’s, either he or one of his friends had one to talk about. When Jim was 14 he went to work for the neighboring dairy farm, owned by brothers, George and Johnny Palmer. He learned all of his common sense and mechanical abilities from his father and these brothers. When Jim graduated from Stephenson High School in 1971 he went to work for Allis Chalmers in Marinette, WI.

Jim came into contact with the gospel of Jesus Christ when he was about 22 years old. He was baptized into the Milwaukee North Branch of the Reorganized Church of Jesus Christ of Latter Day Saints. He moved to Independence to be part of a Zionic endeavor, The City On the Hill, with a number of saints and lived in Sibley with them. When that ended, Jim moved to Lexington, MO and worked for the True Value Store owned by friend, Larry Smith.

In 1979 Jim moved to Oak Grove and began working with Bill and Ron Davies on their farms. The ministry he received from Ron and Bill greatly influenced his walk with the Lord. He moved to Oak Grove RLDS at that same time and met the love of his life, Debbie, in 1980. It was love at first sight. They were wed in Oak Grove on April 11, 1981 and have been an inseparable team since. Jim went to work for the US Postal service in 1986 and retired from there in 2015. Jim and Debbie then went to the Odessa Hills Campgrounds, Odessa, MO and became caretakers of the grounds until his death.

Jim was the first one to help a neighbor, stranger or friend in need. He gave of himself to the very end, even in the hospital by not wanting to bother the staff with his needs. He loved all people, all walks of life and did everything he could to help them on their walk with the Lord. He especially loved the kids that attended camp. He was working for the coming of His Lord and was anxiously engaged in bringing about the cause of Zion. Jim served as Deacon, Priest and Elder and was attending Chilhowee, MO Restoration Branch to help with the ministry there at the time of his death.

Jim joins his parents, Gus and Hazel, a brother, Jerry and an infant sister Mary Jane as well as his mother in law, Mirl Edwards and his sister-in-law, Dena Barnekoff in the heavenly courts. He leaves behind his wife, Debbie, of the home, daughter Mindy (Ryan) of Lee’s Summit, MO, sons Matthew (Megan), Lee’s Summit, MO, Jared (Katie), Blue Springs, MO, and Joey (Kim), Cascade, IA. He also leaves his adored grandchildren, he believed his greatest call was being Papa…. Brice, Gavin, Myles, Emily, Jameson, and Finley. He also leaves his sister, Kathy (Rick) Menominee, MI, his sister-in-law, Sue Mulheron, Stephenson, MI and many nieces and nephews and a host of close friends.

Jim’s wish was to be cremated and Royer’s of Oak Grove, MO was in charge of his care. Jim’s remains have been spread at the campgrounds he loved, the hunting camp he spent his youth and Hayward Bay, Lake Michigan, the family gathering place of his very large extended family. Visitation will be open house format on July 30th, 2021 at the Oak Grove Restoration Branch, 1204 N. Broadway, Oak Grove, MO, 5-630pm. Cake and ice cream will be served in honor of Jim’s birthday. He never passed up a reason to have dessert. A video of his life will play at 630pm and a Celebration of Life service will follow at 7pm at the church. No flowers please…if you must contribute something you may send donations to Odessa Hills Campgrounds, c/o Larry Marsh, 706 S Clay, Holden Mo 64060.

Let not your heart be troubled; ye believe in God; believe also in me. In my Father's house are many mansions; if it were not so, I would have told you. I go to prepare a place for you.

Posted by Restoration News - if you want to add a post - e-mail gdschnack@hotmail.com at 7:37 PM