https://www.facebook.com/Fouts-Funeral-Home-Woodbine-161058843917646/?ref=br_rs  (please copy and paste the underlined link into your web browser or look up "Fouts Funeral Home Woodbine" in your Facebook search bar to find the live stream- this will start at 11:00 a.m. on Monday, October 12th)

Michael Emrey Coolman was born on March 12, 1949, to Elwin and Eleanor (Rozell) Coolman in Nebraska City, Nebraska. He grew up in Plattsmouth, Nebraska and graduated in the class of 1967. Mic met the love of his life, Ladena Collins, at church in 1965 and according to him, he has been chasing her ever since. The couple were married on May 19, 1968, in Omaha, Nebraska. Shortly after being married Mic left his job as produce manager at Hinky Dinky and began working for Ladena’s father; later his father-in-law helped him get into the Local 464 Steam Fitters Union, which he eventually retired through. After Mic and Ladena moved from Plattsmouth, they lived in a couple different towns. They then settled in Syracuse, Nebraska for 11 years before moving to Logan in 2000.

Mic was a very active member of the Followers of Christ. He was first called into the priesthood in 1969 to the office of Priest and then was called to the office of Elder in 1976. He served many roles in the church including Pastor, Sunday School Teacher and he and Ladena oversaw the youth ministry for 17 years. He blessed many people by presiding over baptisms, baby blessings, weddings and funerals. Mic loved Nebraska Husker Football and many holidays were spent with family target shooting. He loved to help people. His life was filled with his church and work. More than anything, Mic loved his family, and he made sure that they knew that he loved them ‘more’.

Mic was preceded in death by his parents; children, David, Cindy Rae, Kandy Kae, and Daniel; brother Jim Coolman and his wife Barbara, and daughter-in-law, Julie Coolman. He is survived by his wife of 52 years, Ladena Coolman of Logan; children, Don Coolman and his wife Libby of Logan, Peggy Knaus of Tuttle, Oklahoma, Ginny Coolman and Christopher Coolman both of Logan and Mindy Coolman of Omaha; eight grandchildren; sister, Beverly Gray of Cameron, Missouri; mother-in-law, Blanche Collins of Bellevue, Nebraska; many foster children; and many other relatives and friends.

Your Brother in Christ,Mark McCormick
Proverbs 3:5 "Trust in the Lord with all thine heart; and lean not unto thine own understanding!" 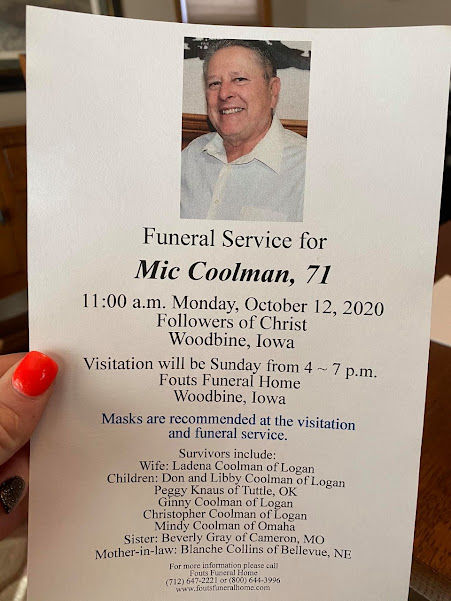 Posted by Restoration News - if you want to add a post - e-mail gdschnack@hotmail.com at 7:07 AM