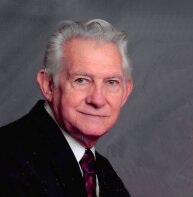 PRINT
Frederick F. Striley, Sr., 86, of Independence, MO, passed away on July 25, 2020.A visitation will be held on Thursday, July 30, from 9-10am, with funeral to follow at 10am, both at Carson-Speaks Chapel. Burial will follow in Mound Grove Cemetery.In his memory, contributions are suggested to an organization of donor’s choice.Fred was born on October 27, 1933, in Delta, CO, to Fred H. Striley and Bessie Rose Kubert Striley. He and his family moved to Missouri when he was a young boy. Fred began working as a teenager and didn’t stop until well into his eighties. He drove a big rig for Pacific Intermountain Express (P.I.E.) until the company closed in 1991. He then worked as a maintenance supervisor for his church, South Crysler Restoration Branch, helping with plumbing, electrical, construction, and any other odd job the church or its members needed help with. Later, he got back in the driver’s seat with Nielson Lumber Co. and drove for them for a number of years. He was a diligent, hardworking man who would always lend a hand where he could. He enjoyed gardening and spent over 32 years in Boy Scout leadership. He was a member of the Teamsters and of South Crysler Restoration Branch.Fred married Kathryn Barber on October 12, 1956 and to this union were born four sons. Although he worked long hours, he made family time a priority. His work ethic and outgoing personality will be dearly missed.Survivors include his wife of 63 years, Kathryn; sons Fred Striley Jr. (wife Catherine), Mike Striley, David Striley, and Steve Striley (wife Rebecca); grandchildren Jonathon Striley (wife Catherine), Jessica Striley, Nicole Young, Jordan Striley, Ryley Crabtree, and Claire Crabtree; one great-grandchild on the way; and a host of extended family and friends.He was preceded in death by his parents, one brother, and two sisters.Online condolences may be left for the family at www.speakschapel.com
Arr: Carson-Speaks 816-252-7900
Posted by Restoration News - if you want to add a post - e-mail gdschnack@hotmail.com at 5:00 PM