This morning I received this text from a friend:

I "saw" Adrienne this morning. I think it was after 5 a.m. She was walking through a doorway that I couldn't see. She turned and waved. The enormous smile on her face reflected great JOY. I think she said she would see me again, soon. It was not spoken, and maybe I imagined it.  She was beautiful.

I want to thank everyone for their continuing prayers for my dear friend, Adrienne, and her husband, Phil.   Adrienne is still with us, and still on a ventilator.  I was more hopeful a few days ago when word came that she required only 70% oxygenation, but all that changed yesterday morning.  Now she is on 100% (the max the ventilator will go), along with something called paralytic infusion which is a medication that places her in a state of paralysis, and provides opportunity for the oxygen to work as well as it can.  A few days ago her lungs began to show signs of infection and she was placed on antibiotics.  This, along with the fluid already in both lungs from the pneumonia is why the nurses keep saying, “Her lungs don’t look good.”   My friend’s sedation level has just been increased, again, for obvious reasons.  I have learned that such a process involves enduring a lot of pain given the amount of oxygen being forced directly into her lungs.  And this doesn’t account for all the other painful procedures, like shots in the stomach to prevent blood clots, and eating from feeding tubes, etc.   Adrienne remains very heavily sedated, though there are times they will decrease the sedation and test her, neurologically, to see if she can respond.  So far, she responds pretty well.  She has no fever, and her vital signs are good.  As the ICU nurses keep saying, she is critically ill, though stable.

Meanwhile, her husband, Phil, is still at home.  Now he is developing pneumonia, and is keeping a watchful eye on his own breathing and oxygen level.  So far his oxygen is fairly normal, so long as he doesn’t move around much.  I helped him call several Urgent Care Clinics, hoping we could find one that would do a teleconference call, and prescribe him steroids or preventative antibiotics.  One of my favorite ICU nurses recommended he do this.  Unfortunately, no Urgent Care clinic would even talk to him – except one—and all they did was tell him to go to the ER.  Unless his oxygen stays at 90 or less, the hospital will not admit him, so he is continuing to fend for himself.  When one of his sons went recently to the ER with the same sickness, including pneumonia, they sent him home without anything.  No steroids.  No antibiotics.  Ivermectin is illegal in Michigan but Phil managed to obtain a small supply from a cousin who had received his supply from a pharmacy in Florida.  Phil is wishing he could have found it sooner, as he would have given his portion to Adrienne.

This experience as a frontline advocate has kept me on the phone quite a bit since it all started on Monday, November 15th and I am thankful to be part of it.  I have learned so much, and am continuing to learn a lot.  I also feel like I have made friends with a few of the nurses in the hospital that goes by the name of Genesis.  Some of them are educated in ways that have surprised me.

Placing daily calls to Phil (sometimes 2, 3 or more times) and providing him with ICU updates about his wife has also been a unique kind of blessing.  His wife’s last words to me, which she also asked me to pass along to Phil, were “Trust God.”

As Phil says, “Sometimes that is the only thing you can do.”

Thank you all again, for continuing to keep my friends in your prayers.

In 2010, Adrienne brought 3 of her sons to our home in Virginia.

In this photo I was performing a color analysis on her. 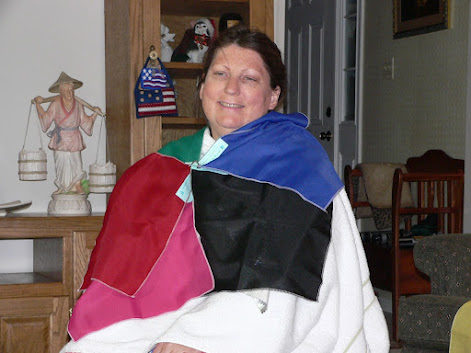 Posted by Restoration News - if you want to add a post - e-mail gdschnack@hotmail.com at 7:09 PM